A lot of people have died during my life.  Almost all of my family, the people I grew up with, many good friends as well.  But none haunt me as much as Kilgore.  I still think about him every day.  Still call Springsteen by Kilgore’s name at least a few times a week.  Still…

He will forever own a piece of my heart.  Perhaps the short film I made with him and Casey can sort of explain why.  (It’s at the very end of this post.)

What follows (below the photo of my tattoo, and the shot of Kilgore which inspired it, which did not come from the film mentioned above) is one of the best thing I feel I’ve ever written . . . certainly the most heartfelt. I present it again, as I have every years since his death, as originally written. Hug your pet, grab a box of tissues and read on . . .

My first tattoo (at the age of 50), placed so that Kilgore can peek out from under my shirt sleeve and still make me laugh. 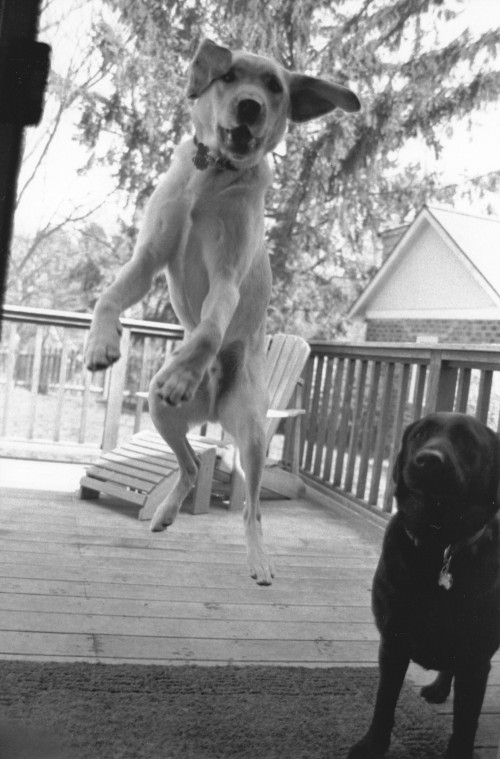 Kilgore jumping. Casey is not amused.

A tumor the size of a grapefruit. I saw it on the x-ray, filling the space between his liver, his spleen, and his stomach. Perhaps encroaching on his lungs as well. Suffocating Kilgore Trout from the inside out.

At first we thought it was a reaction to Previcox. A drug given to him just about four weeks ago to help with his hips. He was having the worst time walking, this glorious pup who would jump, would bounce, like on a trampoline whenever he saw me.

(watch the clip that now opens my website as proof . . . t’s 45 seconds that will make you smile.)

At first the drug did wonders, until he stopped eating, starting vomiting. Side effects all, so many serious side effects. How could this fucking killer pill be on the market?

I am angry. I am seething. I know Previcox did not kill my dog, but it certainly didn’t help there in the end. A shot of Pepcid did for a while. But still the appetite nowhere near the vacuum cleaner-like enthusiasm with which he used to eat. Less and less every day. And the vomiting returned. Bile, from his mostly empty stomach.

More Pepcid. But it didn’t seem to help this time. Finally a trip to the vet. You could see it in her face as she checked him stomach. Perhaps we should get him x-rayed…now. The normally busy hospital would take us NOW.

So I dropped my wife at home so she could tend to our other dog, and drove Kilgore down to Central Hospital in New Haven. It was quick. He sat by my feet afterwards as I waited on word. The receptionist said the vet wanted to speak with me. She gave me the news. None of it good.

How long does he have? I asked. A few days, was the response. Or perhaps to the beginning of next week. (This was a Thursday.) The x-ray technician showed me the tumor. It was massive. All encompassing. There was nothing to do but make him comfortable during his last few days.

But a small meal of Kentucky Fried Chicken pulled from a breast was all he could manage. A few strips of it really. And a little water to follow. That would be his last meal. My dog who could eat anything and everything, from a full edition of the Sunday New York Times to financial magazines (he especially loved to “tear into” MONEY and KIPLINGER’S) to, well…anything he could find in the yard., gross or not.

Whenever I put a 12-pack of beer away, he’d wait patiently, then snatch the empty box as I pulled out the last beer and put it into the fridge. Then he’d play keep-away with it, or tug-of war. Or he’d lie right down and start ripping it to confetti. He especially loved Rolling Rock boxes.

But he could eat anything and everything, always without repercussion. Now, nothing…

He walked around on his own on Friday. Venturing out into the yard, up on the couch with a little help. He wagged his tail, but mostly slept a lot.

That night, Friday, what would be his last night (october 24), I slept on the couch with Mr. Trout. Well, he slept on the couch. I was mostly on the coffee table, but that was ok. He rested his chin on my leg, I scratched him behind his ear.

My wife and I kept asking anyone we knew…how would we know when it was time to put him to rest? Well, he told us.

Kilgore got up twice that night, went out into the yard, slowly, but surely. But then came the morning. Almost two days now without food or water. And when it came time for him to go outside, he made it through the door, but had to lie down after only a few steps. He couldn’t get up. We knew…

We had already made an appointment at the vet for Saturday morning. Originally for a check up to see if there was anything else we could do. But now I needed to call them, and change the appointment until late in the day. The last appointment of the day.

He couldn’t really walk, so I carried my friend out to my Jeep and laid him down in the back. And, the three of us took his final ride. My wife sat in the back with him, as I went into the vet office to make sure everything was ready. Then I carried him in and laid him on the table.

After a while the vet came in an asked if we were ready. No, how could anyone ever be ready? But I knew he was in pain, I knew he was so tired, and I certainly didn’t want that thing inside of him to burst.

He lay, as he always did at night, two paws straight out in front, his chin resting perfectly centered between them. I squatted down so that I was nose-to-nose with my friend. He never took his eyes off me as the doctor administered the drug that would put him to sleep.

When his eyes finally closed, I kissed his head. Something he so hated until a few weeks ago. I’d always do it at night, and he rub at the top of his head with his paws as if I’d given him cooties, or something. It was a ritual. But he was wagging tail. And in my heart I always believed he was perhaps embarrassed in front of the other dogs, like why was I kissing his head in public?

But this would be the last time I’d get to kiss the top of Kilgore’s head.

Goodnight, my sweet prince, perhaps one day we’ll meet up on the other side.