Just a quickie here, but wanted to post some of the fun graphics created for the film by Sarah Hajtol. One of the most important thing any film can have is eye-catching graphics. But something that is not only eye-catching, but also fits the tone of the film.

Think about it this way, picture a wall of band flyers. Do you want to get lost in the mix, or do you want to stand out? Same goes for film festivals. You want your poster to grab attention whether it be hung on a wall in an indie video store, or on a telephone pole, of just lying on the welcome table when you enter the festival.

My directions to Sarah: “break all the rules.” As always, she rocked it!

And here first is our amazing poster: (Photo of The Replacements by Greg Helgeson)

The front and back of our promo postcard: (Photo courtesy of Twin/Tone records.) 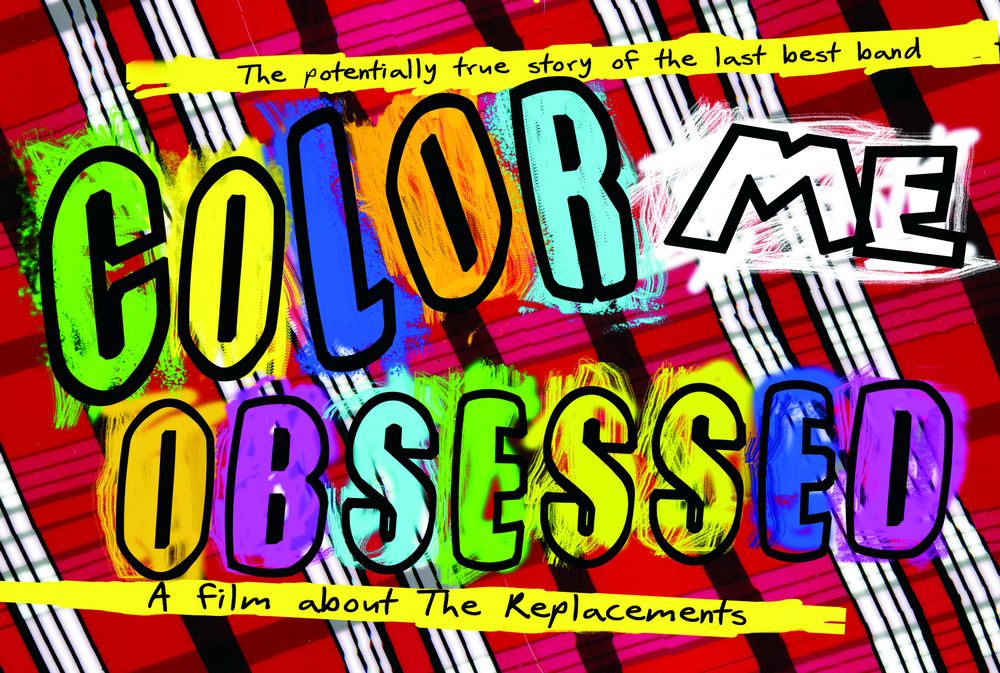 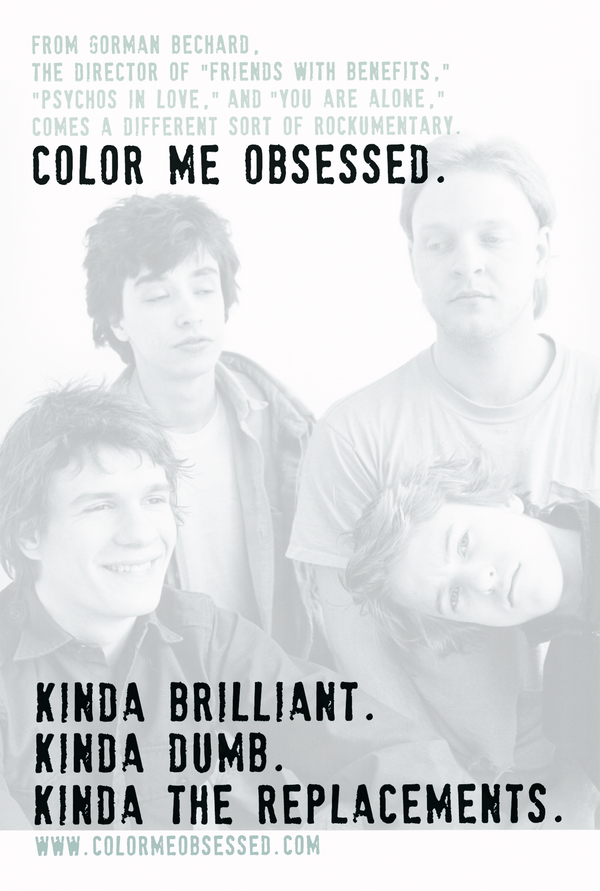 Feel free to use these for COLOR ME OBSESSED promotional purposes.

Diane was one of the first to contact me about this project, shortly after hearing that I’d taken it over. Little did I know at the time she would become our Color Me Obsessed angel, the executive producer that truly rose to the occasion at every opportunity, every chance I gave her. This would be a much different film without Diane’s participation. She became the sort of executive producer every filmmaker dreams of.

After her interview was over, she took us upstairs to her museum in the making, a collection of rare Mats memorabilia unlike I’ve ever seen in one location. Posters, tickets (she had a ticket for their SNL appearance!), vinyl, and even a test pressing. It was the collection the rock hall of fame should have, but doesn’t.

Next up, Ira Robbins, founder of the legendary Trouser Press. Now for those of you not rocking out in the late 70s, TP was the indie rock alternative to Rolling Stone. It was sort of the Pitchfork of its day. (Ira, please don’t hate that comparison, I mean it as a compliment.) The interview was brilliant. Here we had one of the most respected rock journalist of all time approaching the Mats from a historical perspective. Why they mattered. What made them different. What made them great.

As I once again said to Adrian one the drive home, “we have a movie!”

Documentary on indie-rock legends The Replacements set to premiere.

Told through the eyes of fans, friends, and contemporaries, COLOR ME OBSESSED breaks from the traditional music documentary format of music and performances. Not looking to make a VH1/where-are-they-now style documentary Bechard took a unique approach, “I decided to present the band in a more iconic way,” he explains. “I thought, people believe in God without seeing or hearing him but rather through the passion, faith, and stories of others. After watching COLOR ME OBSESSED, I’m pretty sure music fans will believe in The Replacements in much the same way.”

Telling the band’s story was a project close to the heart for Bechard. Like many who were weaned on punk music he latched onto this brash young Minneapolis band with fervor. Dubbed “the last best band” by Spin Magazine, their live shows could be miraculous or downright disasters. Their fans, unwaveringly faithful. As critic’s darlings, their albums were wrought with angry guitars and passionate well-written lyrics that hinted at potential commercial success. Yet, somehow, the band managed to continually shoot themselves in the foot. Their relative obscurity was a motivating factor in presenting their story on film. “The Replacements should have been the next Rolling Stones,” Bechard says, “And to the people who loved them, I think they were.”

Combining over 140 interviews with rockers (Colin Meloy of The Decemberists, Craig Finn of The Hold Steady, Tommy Ramone, Grant Hart and Greg Norton of Husker Du, all three members of Goo Goo Dolls), journalists (Robert Christgau, Legs McNeil, Ira Robbins, Greg Kot, Jim DeRogatis), and fans both famous (Tom Arnold, Dave Foley, George Wendt) and not, Bechard delivers the obsessive tale of the most influential band you’ve never heard of, The Replacements. And though containing not one note of their music, COLOR ME OBSESSED is a documentary that really rocks.