First off, the FRIENDS (WITH BENEFITS) screenings…

I’m a control freak. Especially when it comes to my films. Even my books don’t generate the blind passion, the rage, the knitpicking. But of course, I’ve never had a book destroyed by an idiot editor. Sure, I might have disliked the cover of GOOD NEIGHBORS or the cover copy on UNWOUND. But still what was between the covers remained mine one hundred percent.

I’m not even talking so much about production here. Because there are certainly people I’ve worked with to whom I give pretty close to free reign. I’ve mentioned them a few entries back. I’m talking about once the film is done…when I’m ready to sign my name to it and show it to the world. That’s when I become a raging lunatic. And BLUE CAR is the example as to why.

BLUE CAR is a beautifully haunting and depressing film about a troubled high school student played by Agnes Bruckner and the teacher who takes advantage of her. Bruckner is startling in the role which is brimming with heartbreak and despair. This is a dark, deep, near perfect film.

But you’d never guess that from the cover of the DVD which makes it look like a teen sex comedy. Hot body, ripped jeans, belly shirt. Hell, I’ve recommended this movie to people who wouldn’t even pick the box off the video store shelf because of the cover. 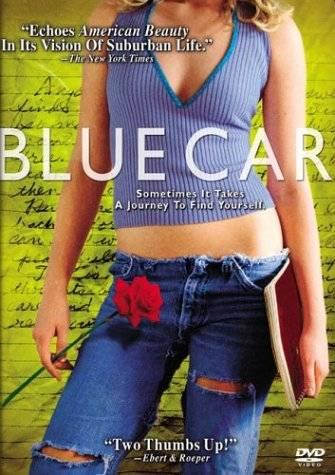 Now the reason I bring this up. I would have gone ballistic if this were my film. I would have been arrested for what I would have done to whomever was in charge of the DVD cover. Not an exaggeration, I would have fucking nuts. Granted, the original cover, a blue-tinted shot of Bruckner’s face, was far from perfect or intriguing, but at least it made you wonder about the film.

The DVD box not so much. Despite the quotes, you’re pretty damn certain it’s a National Lampoon-type summer sex romp. Or perhaps it’s at least the kinkier version of AMERICAN BEAUTY, where Kevin Spacey gets to actually bang the cheerleader.

I use this example whenever negotiating a dvd deal. It’s the reason why I insist on approval over the cover artwork, or at least a clause stating they can only use the artwork which I provide. It’s one of my biggest sticking points. C’mon, how easy would it have been for some sleazebag distributor to re-title YOU ARE ALONE as SCHOOLGIRL ESCORTS GONE WILD, slapping a suggestive photo of lead actress Jessica Bohl posed in her schoolgirl uniform on the cover? How easy would it be for a distributor to focus on the sex of FRIENDS (WITH BENEFITS) and not the story? They’d argue it would be to sell more titles. Unfortunately they’d be selling more titles to the wrong people.

Anyone bringing home BLUE CAR looking for some soft-core fun would have been sadly disappointed. SPOILER ALERT: Brucker gets molested by her teacher. Her kid sister kills herself for Christ’s sake! What the fuck was the cover designer thinking? Did they even see the damn movie? Probably not!

Likewise, anyone looking for a devastatingly deep, perfectly acted drama would have never gone near the box. Sorry, belly shirt does not scream depression. It screams titillation.

Thus the film was never given a chance to find the audience it so deserved. And everyone loses.

I guess the point of this rant is that just because you’re film is finished, and perhaps you were lucky enough to find a distributor, make sure you’re not signing away your soul for the sake of that distribution deal. If your film is mishandled, it can be more damaging to your career than if it was never released at all.

I’ve seen too many filmmakers say they were just glad to finish a film. But finishing a film isn’t enough. This is your child. You need to watch over it, protect it, nurture it for the rest of your life. You need to make sure it’s as perfect as it can possibly be. And you need to help guide it into the hands of the audience for which it was made. Then and only then will word of mouth will be your friend.

Gorman Bechard is the author of seven novels, THE SECOND GREATEST STORY EVER TOLD, UNWOUND (under the pseudonym Jonathan Baine), NINTH SQUARE, GOOD NEIGHBORS, THE HAZMAT DIARY, BALLS, and the upcoming NOT SO PRETTY. He directed/wrote the documentary COLOR ME OBSESSED, A FILM ABOUT THE REPLACEMENTS, the indie features FRIENDS (WITH BENEFITS) (2008) and YOU ARE ALONE (2005), the horror comedy cult-classic PSYCHOS IN LOVE (1986), as well as the award winning shorts OBJECTS IN THE MIRROR ARE FURTHER THAN THEY APPEAR (2003) and THE PRETTY GIRL (2000). He is currently in various stages of development on four features: BROKEN SIDE OF TIME and ONE NIGHT STAND (parts two and three of his "alone" trilogy), PIZZA, A LOVE STORY (about the three infamous apizza restaurants in New Haven, CT), and the Archers of Loaf concert film WHAT DID YOU EXPECT? He lives in New Haven, Connecticut. View all posts by gormanbechard

4 thoughts on “The making of FRIENDS (WITH BENEFITS) – part 7”