Forgot to mention, my crazy cult horror comedy from 1986 — PSYCHOS IN LOVE — is about to get a top notch dvd release from Media-Blasters. Tons of extras, including two commentaries (one I’m doing now, and one from a few years back with me and Carmine). a behind-the-scenes, the original trailer, a huge photo gallery, trailers for my two most recent films (You Are Alone and Friends With Benefits), a promo video I did for my last book UNWOUND (written under the pseudonym Jonathan Baine), and two shorts, one old (The Only Take) and the last short I made (Objects In The Mirror Are Further Than They Appear)…and perhaps even a few other suprises.

Not to mention, this will be a new transfer off the original film…so it should look pristine!

It’ll be available on March 31, 2009…and you can pre-order your copy of the PSYCHOS IN LOVE dvd by clicking HERE! 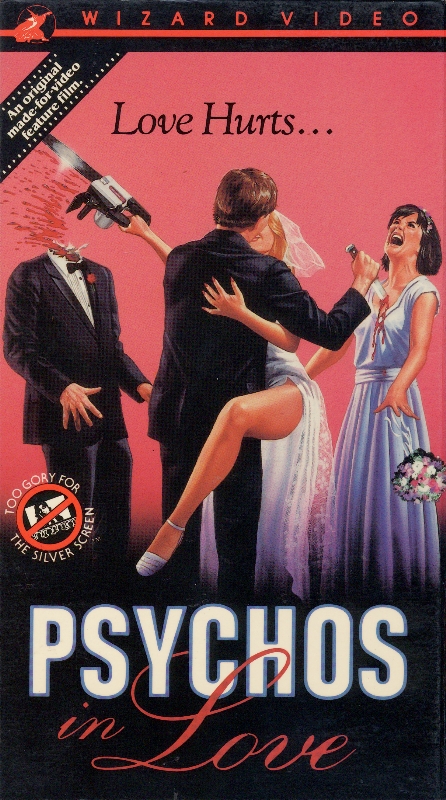 First off, after two weeks I can say that Springsteen is doing quite well adjusting to his new home. Likewise Phoebe has become a great big sister to the pup. I’ll post more pix soon. We’re also closing up all the work on the Connecticut State Film Commission Tax Credit we’re receiving for FRIENDS (WITH BENEFITS) and I will be posting a long blog explaining how everything went down, a good how-to for other indie filmmakers in the state.

But for now, yet another Top Ten CD list. This time from old friend Rob DeRosa. For the best of CT-based music you can hear Rob’s radio show on Thursdays on WESU FM, which is 88.1FM. It’s called HOMEGROWN. You can also listen to archived shows at: www.myspace.com/thinmanmusiclabel

Here now is his top ten:

The Hold Steady- Stay Positive. How could an ex Springstee fan not like these guys? Way too many words sometimes and chock full arrangements- that’s what drew me to early Bruce and it’s what enthralls me about The Hold Steady. I just hope there is no Nebraska in them to screw it all up.

The Mountain Movers- Why Don’t We open the Chest. This band is a pleasure. While I loved the horns on the first CD, the less is more approach here works even better. If Ric promises to bring extra strings, I’ll hire them for Daffodil Fest so I can hear this stuff live in my own backyard, so to speak.

The Manchurians 5×4, The Minster EP. I know, my label. But if this and my next picks were not worthy, we wouldn’t max out credit putting them out. This one rocks in a different way than the last one- probably due to Dean’s layering of sounds and his co-writing energizing Roger to write more songs than he ever did. Short- liethey like their live sets- but it kicks ass.

Frank Critelli- Watlzing Through Quicksand. Frank’s songs always had room for a full band and this disc shows why. His songs here are expansive and moving- and the tight band behind him propells him to rock star staus instead of simply the best folkie out there.

The Sawtelles- Dime Museum. Previously a either love ’em or leave ’em style- this CD shows incredible growth and cohesion of their rather unothadox style. Shany Lawson produced them the way it should have always been. Peter’s words are intiguing and Julie sings better than ever before.

MGMT- Oracular Spectacular suffice to say that this incredibly popular band was for all intense and purposes, my discovery. Well. not entirely- but the Wesleyan duo got their first off campus gig from me- as well as their first club date at Cafe 9 and their first airplay on my radio show. Then they went on to play every festival in the world this year( Cochella, Bonnaroo, Glastonbury, Leeds, Reading, SXSW, Austin City one, two in australia and a few in Japan.) and get on most big music magazines best of lists. They deserve it. It’s a psychedelic dance fest with pithy, ironic and cheeky lyrics. AND the drummer is nailing Kirstin Dunst. Every young rockers dream story.